....learn more and help us to protect all patients!

Liability of manufacturers and dentists for impure implants

How to Choose the Right Implant System

Dental implants are an integral part of the therapeutic armamentarium of contemporary dental practices. With their excellent success rates, they have become the globally-established, alternative treatment to purely prosthetic solutions for tooth loss. With the variety of implant systems offered, it has become increasingly more difficult for the dentist to choose the right system for his or her practice and patients. Specific surface topographies, material properties that promote osseointegration or surface treatments, are often emphasized in advertising as significant advantage of distinguishing a given system from its many competitors.

Different implant surfaces in the SEM without organic or inorganic residues

It should certainly be a matter of course that all dental implants are clean when delivered in sterile packaging. Surface pollution with organic particles or residues of tungsten, bronze or nickel-chromium compounds from the production process are suspected to cause insufficient or missing osseointegration of dental implants. Unintended micrometer-scale particles are highly likely to induce a foreign body reaction with a loss of bone in the early stages of osseointegration.
In three consecutive studies since 2008 – carried out in cooperation with the University of Cologne (Germany) and the Charité University Medicine Berlin (Germany) - scientists have analyzed the quality of dental implants using SEM imaging and Energy Dispersive X-ray Spectroscopy (EDS). 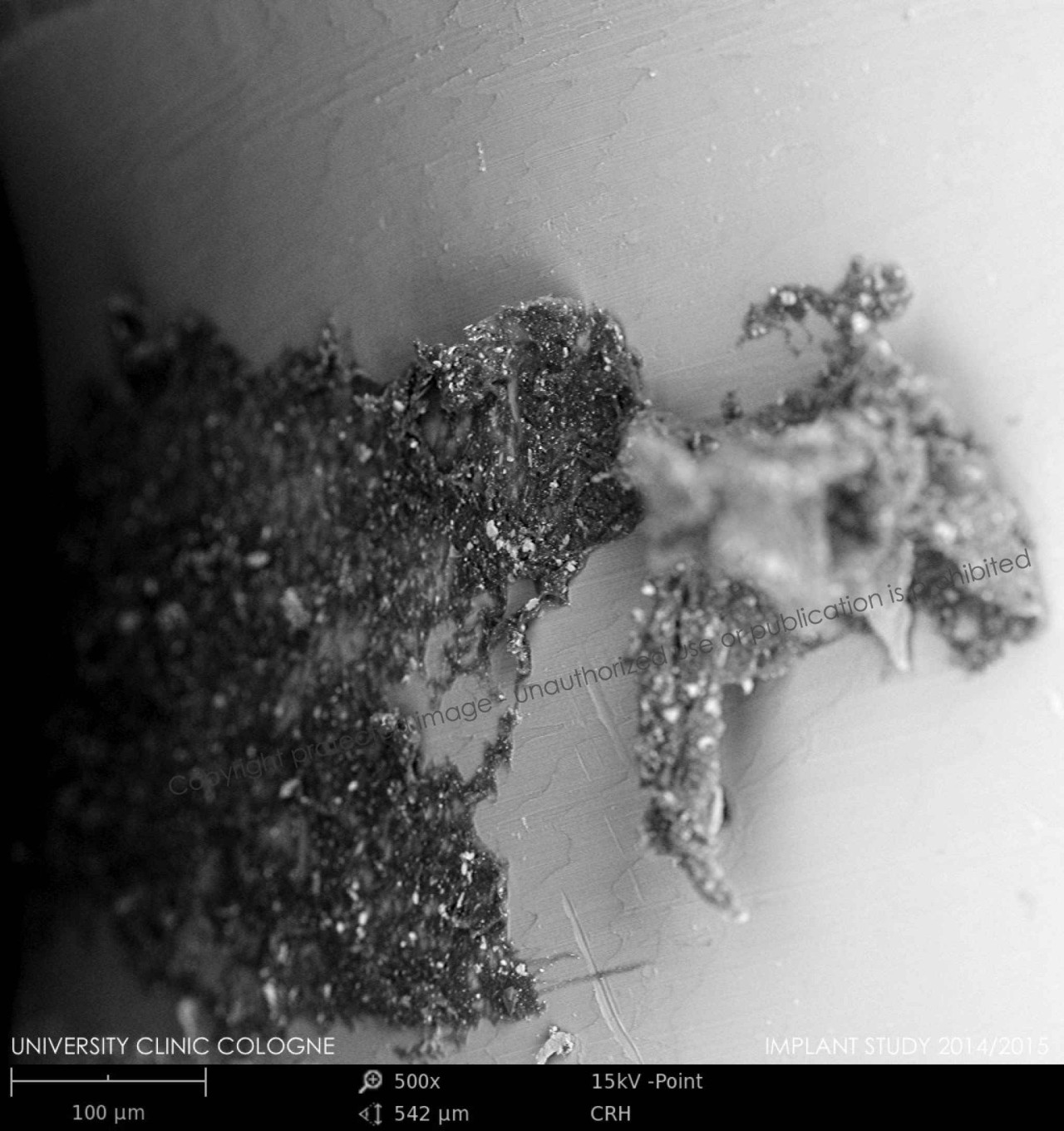 In the past three years hundreds of material-contrast images were obtained and qualitative and quantitative elemental analyses were performed on more than 250 dental implants from 180 brands using the same study protocol. Some manufacturers and suppliers delivered dental implants with no or only minor and isolated remnants on the micron level. Sadly, this was not usually the case, as the study revealed significant differences in the cleanliness of the analyzed samples.

Alarming remnants and contaminants were found in the analysis, e.g., iron, copper, chromium, nickel, tungsten, antimony, silicon, sulfur and large quantities of stainless-steel particles, as well as remnants of polytetrafluoroethylene and other significant organic contaminations.

All analyzed implants – even implants with massive contaminants – carried a CE mark or had received FDA clearance and passed other national regulations. All samples were in sterile packaging and ready to use for implant surgery – supposed to remain in the patient’s bone, at best, for a lifetime.

The aim of this project is to provide the documentation of the manufacturing quality of dental implants. So it is all the more gratifying that, as in previous years, the development efforts of many manufacturers have paid off in the form of a further increase in product quality, such as the elimination of organic contaminants, more precise threads or more user-friendly sterile packaging. Some manufacturers have gone one step further. They have decided to apply for the CleanImplant "Trusted Quality Mark", and undergo the comprehensive analysis and test procedure developed by the CleanImplant Foundation and its Scientific Advisory Board. More about the Quality Mark and the "Five-Steps Approach" for neutral analysis here.

But how does the human body handle particles we find on some implants containing tungsten, antimony, copper, tin, chromium and even nickel? Organic pollutions are generally considered as the contaminants with the most potent clinical impact, such as early implant loss or peri-implantitis. 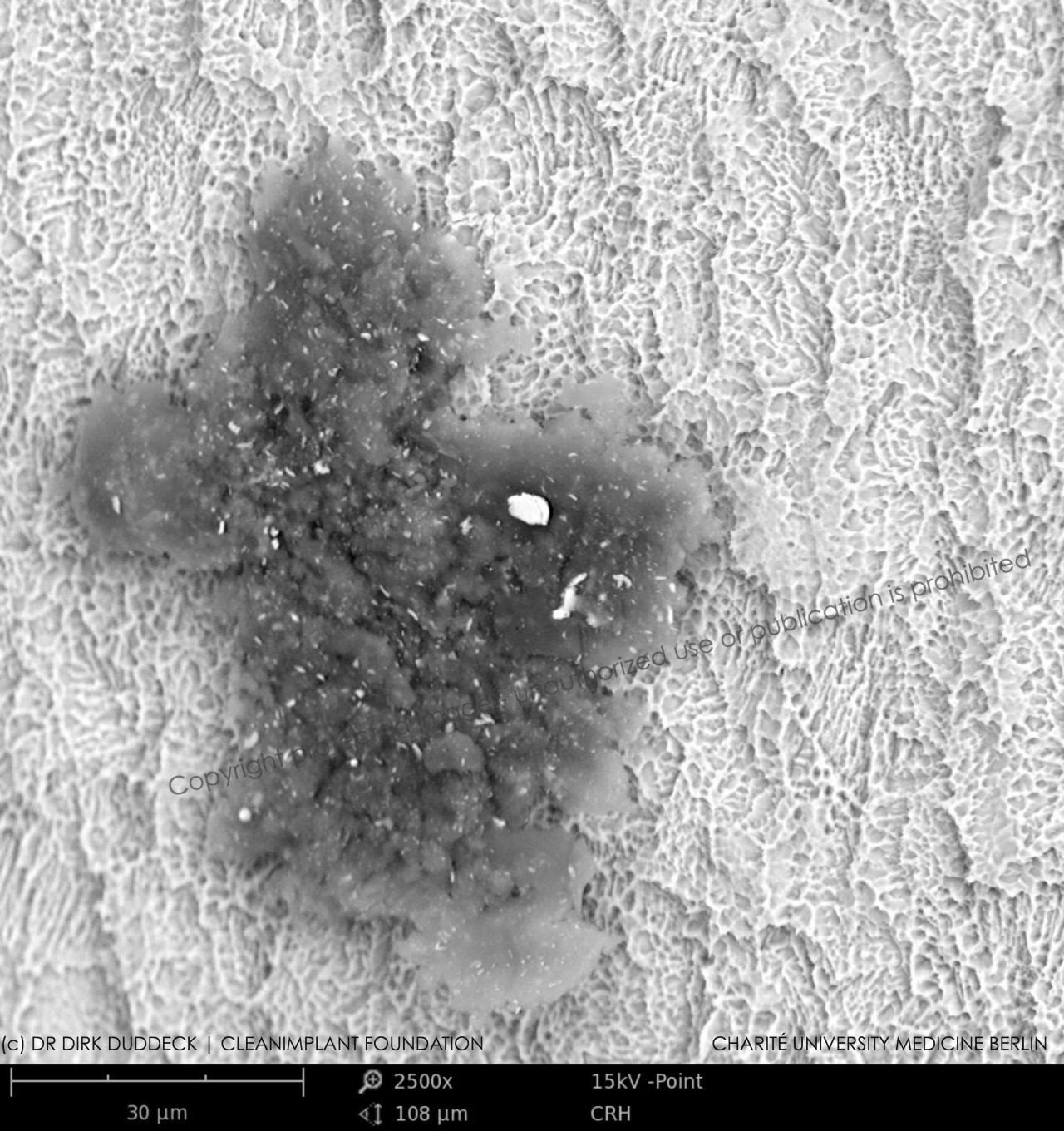 Even if these particles are relatively firmly attached to the implant surface, they are likely to become detached due to the resulting frictional forces in the bone bed as the implants are inserted, at torques in the double digits, to achieve the desired level of primary stability. Particles with a diameter of less than 10 μm are susceptible to uptake by macrophages through phagocytosis, so that questions related to the clinical relevance of such impurities cannot simply be brushed aside. Orthopedic specialists state that particle-induced macrophage activation is associated with an increased osteoclastogenesis and may, therefore, cause increased bone resorption.

Our success rates are high, so what is the problem?

The manufacturers and users of implants where recent studies exhibited some organic contaminants, report clinical success rates that do not differ from those of implants by other manufacturers. Statements such as “Our success rates are high, so what is the problem?” may be fully justified when discussing statistical average. But the question remains: What happens to this organic pollution once in the bone? It is hard to imagine that those organic contaminants should have a positive influence on osseointegration. At best, there will be areas with a lack of osseointegration, i.e. smaller areas or entire outer thread edges with less bone contact because the osteoblasts will have better things to do than to settle on polyethylene residue. Or macrophages cause phagocytosis of these materials during the first remodeling phase, which would amount to a biological purification of industrially manufactured surfaces. What happens to the phagocytized materials is another question.

There is a probability that a certain amount of residue on implants can be tolerated by healthy patients. But can we be sure that this is also the case with immunocompromised high-risk patients? How about extended augmentation sites? And isn't it possible that increased failure rates will occur due to processing residue after all? These questions, however, should actually not arise in the first place, because impurities are preventable, as this study clearly shows.

The vast majority of manufacturers responded positively to requests made by the University of Cologne in 2015. Nevertheless, some manufacturers declared that they had no interest in this research. Not even the fact that the current study did not primarily emphasize the producers’ interests but rather those of the users caused them to reconsider. 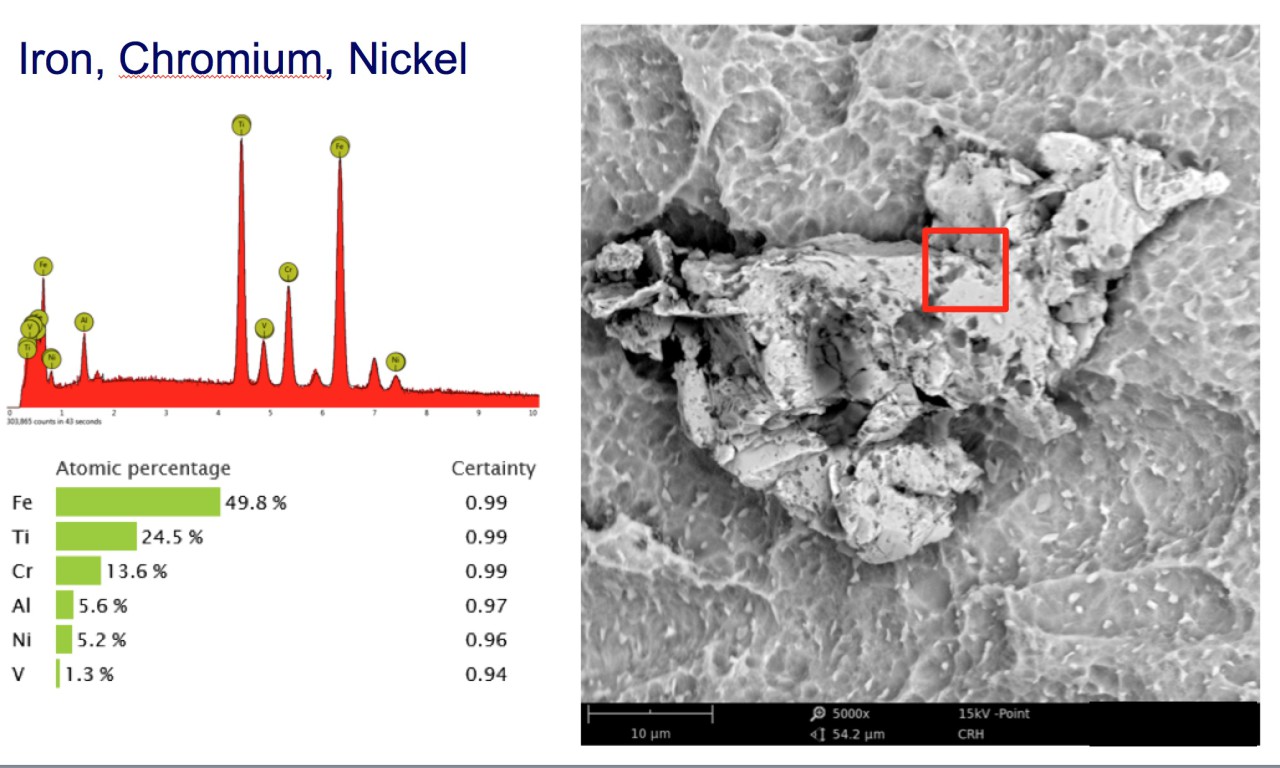 Especially noteworthy was the response from one manufacturer stating that one could not remember ever having received requests from users for SEM images or EDX results. Dentists, the statement continued, assumed that these results were good as a matter of course. Or else they were not interested in this information. And even if they were, they would not know how to interpret the data correctly anyway. All relevant information and a variety of studies on the requested implant system, they concluded, could be downloaded from the company’s website. In fact, the website offered no evidence of the safety of the chromium-nickel-steel particles that were found en masse in the analysis on an implant by that manufacturer.  Another manufacturer explicitly refused to participate in the study but later decided to fulfill the delivery of a sample implant in order not to boycott the study. However, the shipment contained an explicit note to the effect that the implant was not to be named in any publication related to the present study. We acknowledged that desire, but we did not want to deprive our implantological colleagues of the results. In our opinion, if the implants are good enough to be used in patients, they should be good enough to pass an SEM analysis.

Are we dentists, working in the field of implantology, really not interested in the quality of the systems we use? Are we unable to evaluate the results of SEM analyses? Do some manufacturers have to “protect” us from scientific studies because we cannot interpret them correctly anyway?

Every day we are focussed on winning the trust of our patients and every time we perform an implant treatment, we try to prove worthy of this trust. For individual manufacturers to reject quality assessments like the present one or to allege image manipulation is not particularly helpful in this endeavor. However, we have to know, not believe, that a specific implant is without harm to our patients, as Tomas Albrektsson already stated in 2007.

back to the homepage